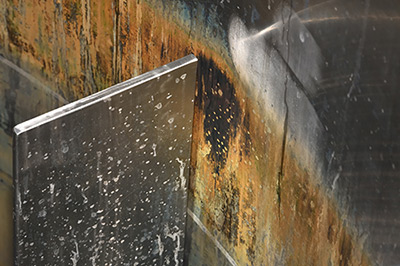 Rouging is a symptom of corrosion that occurs on stainless steel due to iron contamination.  Often unpredictable and imperfectly understood, the rouge is composed of corrosion products that include hydrogen and iron oxides in different states of oxidation.

Specific colors (or rouging) vary depending on the type of iron oxidation and is thought to be the result of a momentary deterioration within the passive surface. Another theory connects rouging to the interaction of passive layers that are high in chromium with water.  The resulting corrosion depends on the chemical composition of the steel and its operating environment.

There are fundamentally three types of rouging:

There are various consequences from rouging that are a major concern including:

These solutions can be completed by your maintenance team if they have the capabilities or through on-site service providers with mechanical polishing, electropolishing, and passivating capabilities.

Allegheny Surface Technology is your trusted provider of high-performance, ASTM and BPE compliant electropolishing, pickling, mechanical polishing, and passivation services. Specializing in both in-house and on-site stainless steel surface refinishing/refurbishment services, AST assures both the quality and reliability of our services through multi-step Quality Assurance and inspection protocols.